Refer a Patient Request an Appointment 800 USC-CARE Donate myUSCchart
Home / Blog / Healthy Skin / What Should You Do When You Find a New Mole?
Healthy Skin

What Should You Do When You Find a New Mole? 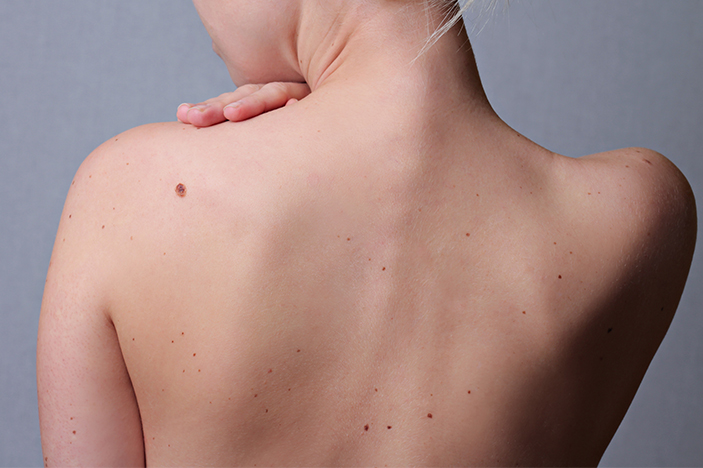 Keeping track of your newfound mole should be a priority.

Moles are totally normal. Most adults have between 10 and 40 of them.

In most cases, moles are nothing to worry about, especially if you’ve had them since childhood or adolescence, which is when moles first tend to appear. They can darken or lighten, and neither occurrence is necessarily a sign of melanoma.

Developing a new mole as an adult, though, is a different story. One review of melanoma literature found that 71% of melanoma cases stemmed from new moles (as opposed to existing ones).

Consider your own self-awareness the first line of defense: When a new mole does appear, it should remain the same size, shape and color. If it doesn’t, then it warrants a visit to your dermatologist.

Your dermatologist won’t necessarily remove or biopsy it, but they can take a photo or note its size and location in order to track it over time.

“Let’s say there’s a person with a mole that’s not quite bad enough to warrant a biopsy, and maybe it hasn’t changed over time,” says David Eric Sawcer, MD, a dermatologist at Keck Medicine of USC and clinical associate professor of dermatology at the Keck School of Medicine of USC. “If there’s a picture in the chart, it’s very easy to note when any change occurs.”

These photographs can also help dermatologists keep track of an area with a lot of moles. “It’s like a star map. You can easily tell if you’ve picked up a new one or see if one has changed over time,” he explains. “Without the photographs, it can be very difficult to see this in people who have lots of moles.”

And, new or not, if your mole has any of the ABCDEs — that is, asymmetry, irregular border (particularly those that are ragged, notched or blurred), varied color (different shades of brown or patchy), large diameter (bigger than 6 mm, about the size of a pencil eraser) or it’s evolving — schedule an appointment. These are the most common signs of melanoma, the deadliest form of skin cancer. It’s worth catching, and addressing, early.

A new mole doesn’t have to be immediate cause for concern. As long as you know what to look for and when to see your dermatologist, there’s no need to worry.

Dr. Nada Elbuluk Talks About Dermatology Care for People of

Rod Hanners, CEO of Keck Medicine of USC, talks with the director of the USC Skin of Color and Pigmentary...
Read more

Dr. Elbuluk is a dermatologist at Keck Medicine of USC, who specializes in skin of color and pigmentary disorders. Here’s...
Read more

How These 4 Skin Conditions Impact People of Color

When it comes to ethnic skin, there are unique issues to consider. As anyone with combination skin can tell you,...
Read more

Is There Any Kind of Tan That’s Safe?

Whether you tan indoors or outdoors, you increase your risk for skin cancer. Sun-kissed. Bronzed. Healthy glow. We’ve come up...
Read more

From hot flashes to reading glasses, here’s what you need to know to stay strong and healthy in your 40s....
Read more
navigate_before Previous navigate_next Next
calendar_todayRequest an Appointment phoneCall Us: (800) USC-CARE searchFind a Provider placeFind a Location