What Are the Different Types of Skin Cancer? 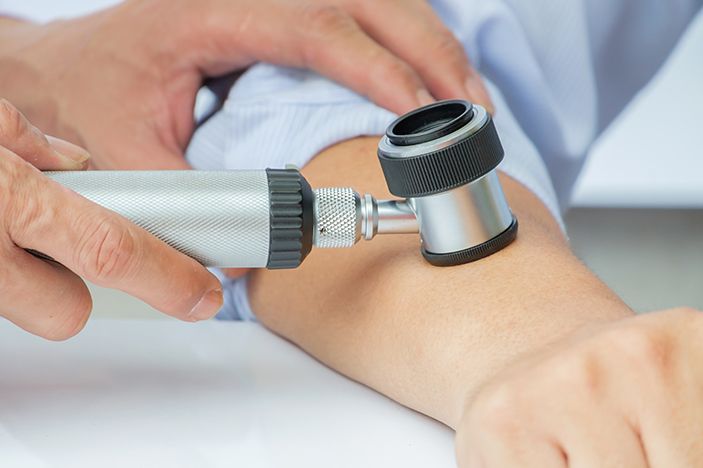 You may be familiar with melanoma as a type of skin cancer, but what other types of skin cancer are there and what signs should you look out for?

With more than 5.4 million people diagnosed in the United States each year, skin cancer is the most common cancer people get. According to the latest reports, each year there are more new cases of skin cancer than the combined incidence of cancers of the breast, prostate, lung and colon.

Melanoma cancer (also known as malignant melanoma and cutaneous melanoma) only accounts for 1% of all cancers, but it causes the majority of deaths from cancer because it can spread to other parts of the body easily.

This cancer begins in melanocytes, specialized skin cells that produce the protective skin-darkening pigment known as melanin. Some melanomas do not make melanin and can appear pink, tan or even white.

While melanoma often gets the most coverage, there are two other major types of skin cancer: basal cell carcinoma and squamous cell carcinoma. Often grouped together as non-melanoma skin cancers, these two types are much more common than melanoma cancer. Although they are unlikely to spread to other parts of the body, they may cause disfigurement if not treated early.

Basal cell carcinomas are abnormal, uncontrolled growths or lesions that arise in the skin’s basal cells, which line the deepest layer of the outermost layer of the skin. They often look like open sores, red patches, pink growths, shiny bumps or scars and usually are caused by sun exposure.

Squamous cell carcinomas usually occur on areas of the body exposed to the sun such as the face, ear, neck, lips and back of the hands. Sometimes they may form in the skin of the genital area. They can also develop in scars or skin sores. Warning signs include:

Other types of skin cancer

Unusual types of skin cancer include Merkel cell tumors. Merkel cell carcinoma starts when cells in the skin, also called Merkel cells, start to grow uncontrollably. This type of cancer can grow quickly and can be hard to treat if it spreads beyond the skin.

Dermatofibrosarcoma protuberans is another rare skin cancer that begins in the middle layer of skin, known as the dermis. This type of cancer tends to grow slowly and seldom spreads to other parts of the body.

Cancer occurs when normal cells go through a transformation and grow and multiply without normal controls. As these cells multiply, they form a swollen tissue called a tumor, which may be cancerous if it is malignant. This means that they will invade neighboring tissues — especially lymph nodes — because of their unleashed growth. They overwhelm the surrounding tissues by taking their space and feeding on their essential oxygen and nutrients.

Chronic exposure to the sun or intermittent sunburns can lead to skin cancer. Skin cancer risk doubles with five or more sunburns in a lifetime, but just one bad sunburn can double the risk of melanoma. While skin cancer is uncommon in African Americans, Latinos and Asians, it can also be more deadly because they are often diagnosed later in the course of the disease.

It’s important to examine your skin regularly. You should report any changes in an existing mole (color, size, border, irregularity) or any new moles to your physician. People with fair complexions have the highest risk of developing skin cancer, but everyone should avoid the sun and practice safety measures to protect their skin.

The American Cancer Society recommends the “Slip, Slop, Slap and Wrap” policy. When you go out in the sun, slip on a shirt, slop on sunscreen, slap on a hat and wrap on sunglasses to protect your eyes and the sensitive skin around them.

Exposure to the UV rays of tanning lamps is not safe. Tanning lamps give out UV rays, which can cause long-term skin damage and can contribute to skin cancer. Tanning bed use has been linked with an increased risk of melanoma, especially for people under 30. Most doctors and health organizations recommend not using tanning beds and sun lamps.

Is There Any Kind of Tan That’s Safe?

Whether you tan indoors or outdoors, you increase your risk for skin cancer. Sun-kissed. Bronzed. Healthy glow. We’ve come up...
Read more

What Should You Do When You Find a New Mole?

Keeping track of your newfound mole should be a priority. Moles are totally normal. Most adults have between 10 and...
Read more

Do You Need Sunscreen if You Are Indoors All Day?

You’re sitting at home and enjoying your favorite show, with no intention of going outside. Do you still need to...
Read more

I Have a New Mole. What Should I Do Next?

If you suddenly develop a new mole, is it cause for concern? Read on to find out. Nearly every person...
Read more

Dr. Ghani is a medical oncologist at Keck Medicine of USC, who specializes in treating a wide range of blood...
Read more
navigate_before Previous navigate_next Next
calendar_todayRequest an Appointment phoneCall Us: (800) USC-CARE searchFind a Provider placeFind a Location