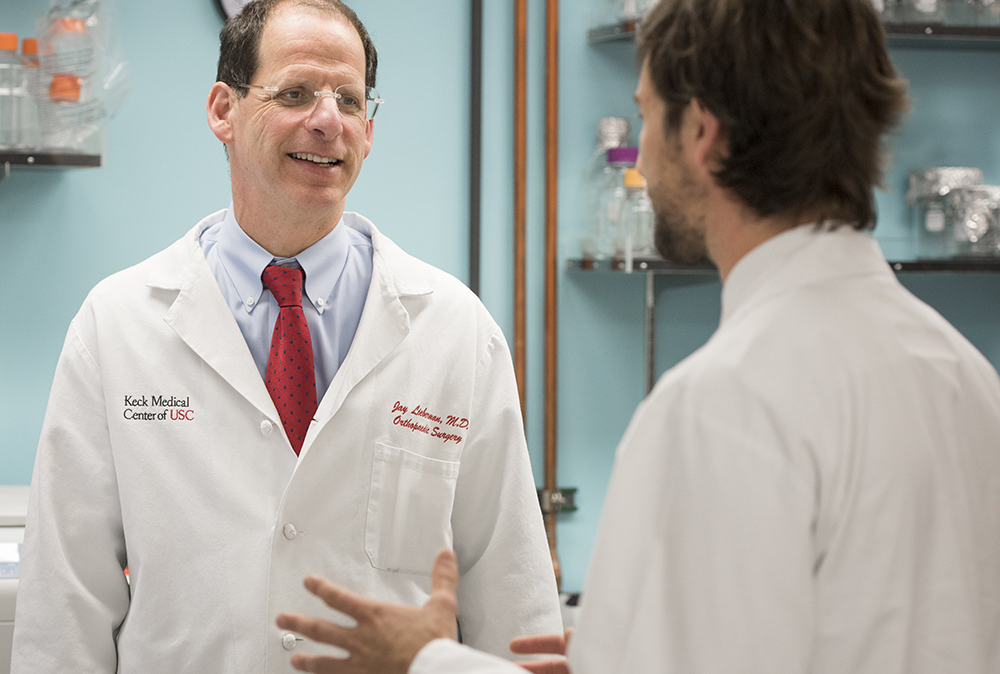 Dr. Lieberman is an orthopedic surgeon at Keck Medicine of USC, who specializes in total hip and knee replacement, as well as diseases of the hip and knee.

“Growing up, I was always interested in sports. I played baseball and football in the street when I was a kid, and I played basketball in high school. In fact, I still play basketball. I have been to seven Final Fours, the Super Bowl and multiple World Series. I enjoy the excitement, the competitiveness and the teamwork involved in sports. I enjoy attending these events with my family.”

He was going to be a history professor.

“When I went to college, I had a deep interest in American history and thought about becoming a history professor. My first TA [teaching assistant] was 29 years old, and he had finally obtained a full-time faculty position at another university. I was only 18, but I remember thinking that it seemed like it took a long time for him to get his PhD and his first job. Obviously, I decided to go to medical school. The irony is that the time I spent in medical school, residency and fellowship, is much longer than it takes to get a PhD.”

He worked at a psychiatric hospital.

“After my freshman year at college, I had a summer job working as an intern at a psychiatric hospital. The patients came in at the beginning of the summer and by the end of the summer, they were discharged home. I liked the idea of helping people and decided to become a psychologist or a psychiatrist. I returned the next summer, and most of the patients were back. I was discouraged that the patients had not been cured. I decided that psychiatry was not for me, but I knew that I wanted to pursue a field where I could help others.”

There are three reasons why he chose to become an orthopedic surgeon and specialize in total joint replacement.

“In my third year of medical school, I was on the orthopedic trauma service. People came in with fractures; we would fix them, and the X-ray provided immediate feedback. During my orthopedic rotation, I realized that I liked the action and that orthopedic surgery involved mostly acute problems. I fell in love with total joint replacement for three reasons: Placing prostheses in patients is a technology-oriented procedure; it is one of the most successful procedures in the history of medicine; and you develop long-term relationships with patients since they are followed for life.”

He thinks spirituality plays a role in patient recovery.

“I have been studying factors that influence outcomes of total joint replacement since the early 1990s. I noticed that patients who seemed to be spiritual weathered difficult medical issues in a way that you would not necessarily see in others. How a patient does post-op is not just impacted by the response to the surgical procedure but also by overall health and mental health. We are doing studies to assess how spirituality impacts a patient’s feelings about their total joint replacement.”