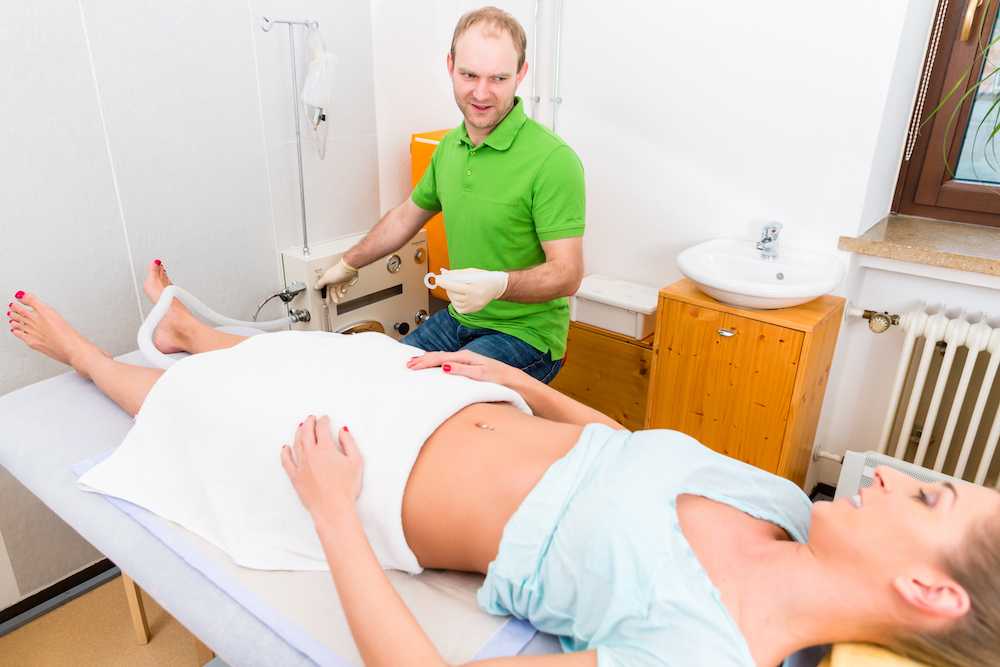 It’s considered a natural way to detoxify the body, but does colon cleansing do more harm than good?

If you’ve had a colonoscopy, you may be familiar with the concept of colon cleansing, which involves using water to eliminate waste material and bacteria from the colon.

Also known as a colonic (or colonic irrigation), colon cleansing is recommended by some alternative medicine practitioners who say it detoxifies the body. They claim that the toxins in your gastrointestinal system may be behind a host of health problems, including asthma and arthritis. By removing those toxins with a colon cleanse, they claim you can feel more energized, lose weight and even boost your immune system.

Like other popular modes of detoxing, such as juicing, this isn’t exactly the case.

A colon cleanse involves flushing large amounts of water (up to 16 gallons) through the colon using a tube that’s inserted into the rectum. Sometimes, coffee or herbs are mixed into the water. In other cases, a small amount of water sits in the colon for a short time and is then removed.

Not only do medical studies not support the supposed benefits of colon cleansing, but the procedure comes with some risks. Researchers have even suggested that several deaths could be linked to coffee enemas.

Colon cleansing has the potential to cause dehydration. It also may perforate the bowels, increase your risk of infection and alter your electrolyte levels, which can be especially dangerous if you suffer from kidney or heart problems. Though other side effects — such as nausea, cramping, vomiting and bloating — are relatively less serious, they’re still no picnic.

“Initial relief may come from abdominal decompression but it is only temporary,” Dr. Lee said. “Colonics can be dangerous as well. It is often performed by non-medical personnel and can severely injure the patients. I have seen several serious complications related to colonics, including rectal perforation.”

Most importantly, colon cleansing isn’t necessary to detox. Your digestive system and bowels already remove toxins on their own. You also need to keep beneficial bacteria in your gastrointestinal system to aid in digestion.

“As we understand more about microbiome, we know there are both good and bad bacteria that reside in our digestive system,” Dr. Lee said. “Having colonics may disturb that balance and cause more issues in the long run. It certainly does not get rid of only the bad bacteria or toxins.”

If you would like to do a colon cleanse despite the risks, make sure you check with your primary care provider beforehand. Also, be aware of which herbs or other additives will be included and hydrate before and after the procedure. But keep in mind that, when all is said and done, you may be causing your body more harm than good.

7 Symptoms That Can Be Caused by Stress

The effects of stress on the body can range from temporary nuisances to long-term negative consequences. Learn what to be...
Read more

This Is What Frequent Diarrhea Could Mean

If it seems like you’re always dashing for the bathroom, you may have this chronic, but treatable, condition. Everyone has...
Read more

What You Need To Know About Diverticulitis

Pain in your lower left abdomen is a hallmark of this surprisingly common condition. If you’re 40 or older, there’s...
Read more

Is It the Stomach Flu or Food Poisoning?

Is your stomach pain from food poisoning or the stomach flu? It can be hard to tell, since both conditions...
Read more
navigate_before Previous navigate_next Next
calendar_todayRequest an Appointment phoneCall Us: (800) USC-CARE searchFind a Provider placeFind a Location