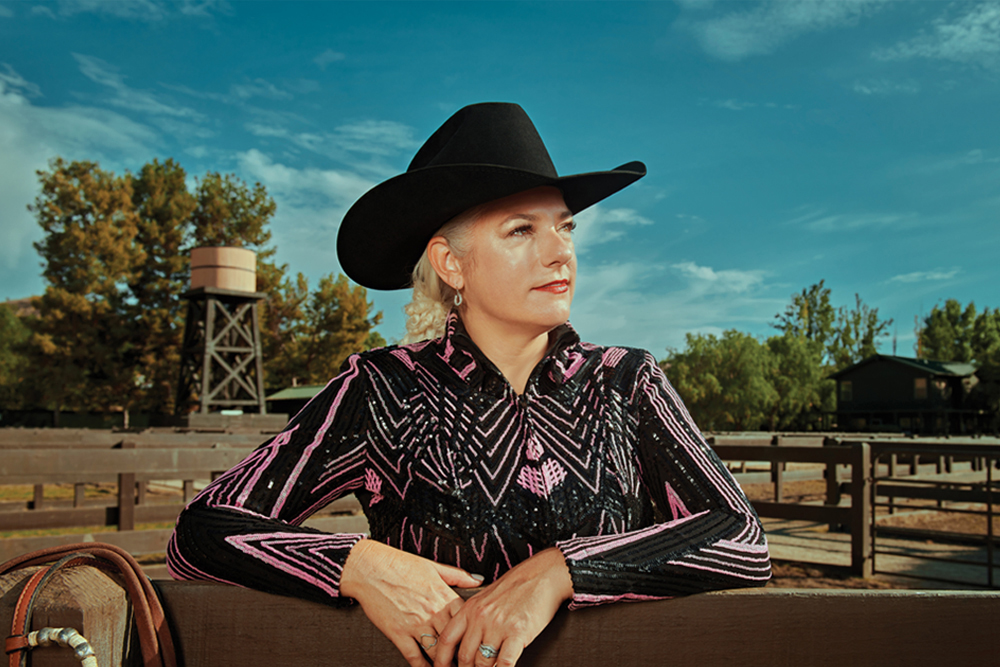 Kristin Titov is highly accomplished in the world of reining — a competition in which a rider guides a horse through a series of maneuvers — and she endures long, intense practices to prepare.

So, after waking up sore one morning, Kristin didn’t suspect a problem.

“I was massaging my neck and felt a bump; I thought it was a knot in a muscle,” says Kristin, who sought relief from a chiropractor in the fall of 2020. “He said it looked like a lymph node and told me to see a doctor right away.”

Kristin’s primary care physician said it was possible she had lymphoma and referred her to Louis VanderMolen, MD, an oncologist with USC Norris Comprehensive Cancer Center in Newport Beach.

Although Kristin had no family history of cancer, she immediately recognized the specialist’s name: Dr. VanderMolen had treated her best friend’s mother.

“For years, I had heard about this doctor my best friend calls ‘the miracle worker,’” says Kristin, a Corona del Mar resident. “She didn’t expect her mother to survive her cancer diagnosis, but she beat it working with Dr. VanderMolen and lived to be 92.”

After an inconclusive biopsy, Dr. VanderMolen sent Kristin to a surgeon to have her lymph node removed.

On her 43rd birthday, doctors told Kristin that she had Hodgkin lymphoma. It is a cancer of the lymphatic system, which includes the tissues and organs that produce, store, and carry white blood cells that fight infections and other diseases.

Hodgkin lymphoma is common in young adulthood and in adults over the age of 65. And while some people experience symptoms such as fever, sweats or unexplained weight loss, Kristin says she felt nothing until she noticed the swollen lymph node in her neck.

Current treatments for Hodgkin lymphoma involve radiation with or without chemotherapy, depending on the stage of the disease.

“The outlook is usually excellent for these individuals,” Dr. VanderMolen says. “Over the years, the treatment has become less extensive, shorter in duration and less toxic.”

I knew from the beginning that I could trust Dr. VanderMolen. I also felt that everyone that he referred me to was top-notch, and they all had nothing but respect for him.

Kristin had several rounds of chemotherapy that tested her emotionally and physically. It also prevented her from spending much time with her horse, Pickles, because she boards the animal in Arizona.

Despite her challenges, Kristin never questioned whether she was in the right hands.

“I knew from the beginning that I could trust Dr. VanderMolen,” she says. “I also felt that everyone that he referred me to was top-notch, and they all had nothing but respect for him.”

Cancer-free and back in the saddle

Kristin credits the entire staff at the treatment center in Newport Beach for delivering a positive experience.

The clinic, which opened in April 2022, uses the latest technology and includes an on-site laboratory and pharmacy to provide patients with coordinated, personalized care.

“Every time I have a follow-up, it’s like going to a family reunion,” says Kristin, who has finished her treatments and resumed running her western-inspired clothing and accessories business, Hobby Horse, Inc.

With her scans coming back clear of cancer, she is planning to return to reining competitions later this year — and with a stronger spirit and outlook to boot.

“In reining, there’s a saying: ‘One box at a time,’” says Kristin, explaining that a rider’s every maneuver is judged separately during competition, with scores totaled at the end.

“That was also my saying when I was going through chemo, even when it was overwhelming: ‘One box at a time and one treatment at a time.’”

After Bladder Augmentation, 'So Very Blessed'

Thanks to a life-changing surgery performed by Evgeniy Kreydin, MD, of USC Urology, Ricardo Sandoval is moving on from renal...
Read more

The technology found a precancerous lesion in Christine Ysabal. After a surgery to remove it, she has become an advocate...
Read more

Rosa Maria Villalpando is the world’s first stroke patient to receive vagus nerve stimulation outside of a clinical trial. The...
Read more

With help from her family and Keck Medicine of USC’s Bariatric Surgery and Weight-Loss Management Center, Brianna Villanueva is primed...
Read more

A mechanical device is keeping Zuleyma Santos alive as she awaits a transplant. She’s also spreading the word about heart...
Read more
navigate_before Previous navigate_next Next
calendar_todayRequest an Appointment phoneCall Us: (800) USC-CARE searchFind a Provider placeFind a Location