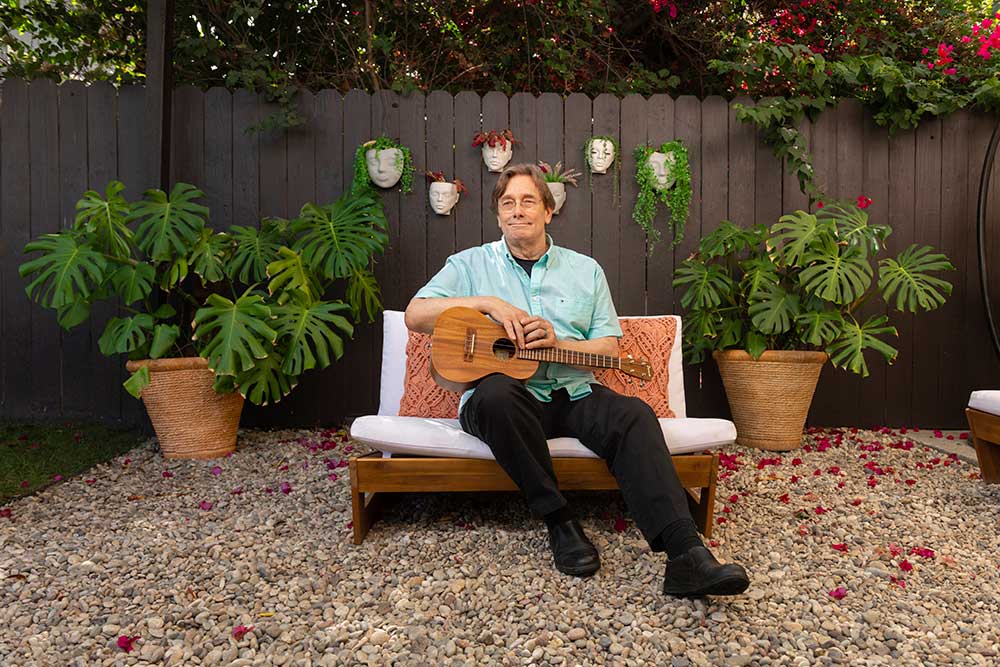 Thanks to USC Norris Comprehensive Cancer Center and a highly compatible donor, Mike Snow received a successful bone marrow transplant after being diagnosed with myelofibrosis.

Mike Snow was driving on a Los Angeles freeway with his wife, Susanne, when he nearly fainted at the wheel.

Soon after, he began to experience severe bleeding from his gums and debilitating fatigue. He was too weak to even play music — a heartbreaking setback for the lifelong drummer, pianist and guitar player.

Mike was hospitalized for several days in May 2019. Doctors diagnosed him with myelofibrosis, a rare, chronic blood cancer that impedes the production of red blood cells.

A regimen of two to three blood transfusions a week over eight months brought no relief for the Pasadena resident.

The patient was told he would need a bone marrow transplant, a procedure where stem cells are filtered from donated marrow and injected into a recipient’s bloodstream. Once inside, the injected cells travel to the bone marrow and create healthy blood that can override the disease.

Mike was referred to George Yaghmour, MD, a bone marrow transplant specialist at USC Norris Comprehensive Cancer Center, part of Keck Medicine of USC. The doctor’s compassion and knowledge quickly made an impression on Mike and his wife.

“He was down to earth, and he gave us an honest description of how it was going to go and what my chances were,” Mike says.

Dr. Yaghmour warned the couple, who first fell in love in 1975, that bone marrow transplants for myelofibrosis patients can be difficult.

“The outcome for transplant for myelofibrosis is lower than average and very challenging,” says Dr. Yaghmour, who is also associate director of the USC Norris Blood and Marrow Transplant and Cell Therapy Program. “The disease is very trying for a patient in terms of transplant, because the risk of graft rejection and relapse is high.”

Still, his candor reassured Mike that he was in good hands.

And the patient was at the top transplant center in Southern California. While the national average for the success rate of bone marrow transplants is around 71%, Keck Medicine averages a success rate of over 85%.

In 2020, the year Mike had his procedure, the average success rate for bone marrow transplant for Keck Medicine patients was 89%.

Registry finds donor with a 100% match

To find a good match between donor and recipient, a group of specific markers in donated bone marrow are compared to those of the recipient. The more markers that match, the higher the chance of a positive outcome.

Roughly two months after adding Mike’s name to the national registry for bone marrow patients — which can be found at BeTheMatch.org — his care team found a 25-year-old woman in Alabama who was registered as a living donor. She had only been on the registry for two weeks.

In an extraordinary stroke of luck, the donor was a 100% match.

Mike’s procedure was scheduled for March 2020, but then, the COVID-19 pandemic hit. The Snows faced a nerve-wracking wait as USC Norris and Keck Medicine staff worked to determine the earliest date that would be safe to resume the treatment plan.

“We were pretty nervous about what was going to happen,” Mike says. “Because by then, we’d already heard how gruesome this illness could be, if things didn’t work out.”

Mike spent one month as an inpatient at USC Norris Cancer Hospital, where he spent the first week in chemotherapy and receiving low-dose radiation to bring his blood ingredients to zero.

The transplant involved Dr. Yaghmour injecting three bags of stem cells from the donated bone marrow into a vein in Mike’s neck. After weeks of preparation, the procedure itself took 15 minutes.

Then, the recovery process began.

“The first 100 days post-transplant are the hardest part of the process, due to the preparation being so hard on the body,” Dr. Yaghmour says.

Mike attests to this, saying that he didn’t feel much different at first, and that the initial side effects manifested as the same symptoms he’d been suffering with for roughly a year.

But his recovery was remarkable. Three weeks after the procedure, Mike began to see some improvement, and it was enough to confirm the transplant’s success. Despite his physical weakness, Mike was elated to know he would eventually recover.

While regaining his strength in the hospital, Mike took up another instrument: the ukulele.

“I hadn’t thought much about the ukulele,” says Mike, who composed two songs and a poem from his bed. “But then, I thought, ‘That’s a small instrument. It doesn’t take up much space. And it’s not very loud, so it won’t bother the other patients.’”

Today, he credits his creative endeavors for helping him through his physical and emotional recovery.

One month after the transplant, Mike was walking and getting stronger every day. Observing his patient, Dr. Yaghmour took note of the support the patient received from his loved ones.

“He has an amazing partner in Sue,” Dr. Yaghmour says. “But we were all a team, honestly. And that is important — having a team like a family to help patients through the process.”

In Mike’s first two blood draws after discharge, his care team saw strong improvement: His platelet count had jumped from 5,000 to 80,000, and the tally would only grow from there. Today, his count is excellent at 172,000, and Mike is back to his diverse musical pursuits.

Since then, Mike and Susanne have reached out to the bone marrow donor to express their gratitude and even forge a friendship. They also remain grateful to the care team who managed the journey.

Mike, now 71, encourages everyone to find out if they’re qualified to donate bone marrow. More people in the registry, after all, makes it more likely that a person in need can receive a crucial transplant.

While Richard Smith was helping his sister move back to their hometown in Oregon, he felt a twinge in his...
Read more

A mechanical device is keeping Zuleyma Santos alive as she awaits a transplant. She’s also spreading the word about heart...
Read more

A delicate and complicated ear canal surgery helped Jake Valtierra his realize his dream: a chance to truly hear the...
Read more

Rosa Maria Villalpando is the world’s first stroke patient to receive vagus nerve stimulation outside of a clinical trial. The...
Read more
navigate_before Previous navigate_next Next
calendar_todayRequest an Appointment phoneCall Us: (800) USC-CARE searchFind a Provider placeFind a Location