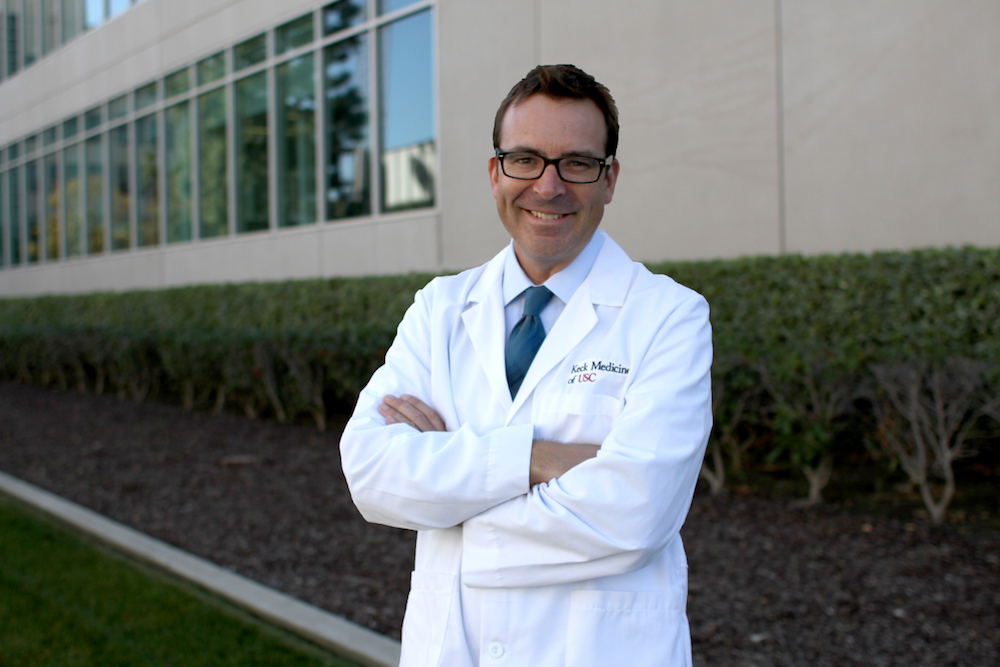 Dr. Carmichael is an endocrinologist at Keck Medicine of USC, who specializes in the research and treatment of pituitary disease.

In training, he became interested in how endocrinologists thought about disorders.

“Endocrinology examines body function in a very complex way. I was drawn to the study of hormone interactions — specifically, the way that these interactions can manifest different degrees of disease in various people. I also really liked the idea of being able to go into a field where you can measure something — in this case, hormone levels — and be able to tell so much about what’s going on in a disease process.”

He has an impressive music collection.

“Between my vinyl records and CDs, I own between 3,000 and 4,000 albums. Growing up, I would go to record stores all the time. There was one in Costa Mesa, in particular, with vast amounts of records. I have always listened to a variety of genres, but I have primarily listened to independent rock since college.”

He’s always been a competitive runner.

“I’ve gotten back into running after a little bit of a break. In high school, I ran track and cross-country. I ran the New York Marathon a couple of times when I was completing my fellowship. There’s something about the challenge of running a marathon that I think is very appealing to people — it’s nice to be able to say, ‘I’ve done that.’”

His house is a Los Angeles cultural monument.

“I’m interested in the historic preservation of modern homes and buildings in the city. Occasionally, I attend Modern Committee (ModCom) meetings with the Los Angeles Conservancy. I became really invested when my wife and I bought our house. We applied to the city and got it listed for historic preservation. It’s a mid-century modern house designed by David Hyun, who famously designed the Japanese Village Plaza in Los Angeles’ Little Tokyo.”

The USC Pituitary Center focuses on a multidisciplinary approach to care.

“The pituitary is called the master gland because it controls and receives a lot of input from many other glands in the body: It controls the ovaries, the testes, the adrenals and the thyroid. At the USC Pituitary Center, we wanted to develop a center with a multidisciplinary approach, which includes both an endocrinologist and a neurosurgeon, among many other areas of medicine. Many of the diseases are primarily treated with neurosurgery; however, there’s a lot of endocrine dysfunction that happens as a part of the diseases and many new medications for the treatment of hormonal disorders. We think a group approach toward patient care improves communication among physicians and the patients.”

He and his wife are both physicians, and they met in medical school.

“My family is very important to me. My wife is a pulmonary and critical care physician, and we have two daughters. I really treasure being able to spend time with them.”