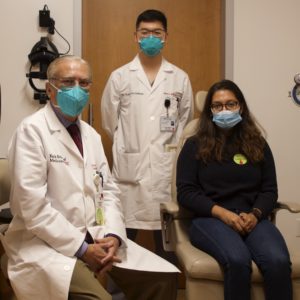 In March 2019, Namita Sarraf’s life changed. She began suffering episodes of redness, pain, and light sensitivity in her left eye that seemed to recur despite treatment by her ophthalmologist. Namita, a busy graduate student, was trying to finish her studies in bioengineering. She didn’t have time for this.

“When the pressure in my eye was really high, it felt like a balloon about to pop,” Namita said. “There was also sharp, piercing pain near my temple, a pressure headache. When I stood up, my vision clouded over. There were halos around lights all the time, but especially at night.”

Namita was diagnosed with recurrent anterior uveitis of her left eye, a relatively uncommon condition in which the colored part of the eye becomes inflamed, sometimes for unknown reasons. Her ophthalmologist treated her with anti-inflammatory steroid eye drops, but these had the dangerous side effect of increasing the pressure in her eye and causing glaucoma – a condition in which blindness can occur due to optic nerve damage from persistently elevated pressure. After nearly a year of treatment, the episodes of eye inflammation continued, and it seemed her condition was not improving.

“I was frustrated that the inflammation kept coming back after each round of steroid eye drops,” Namita said. “It became clearer over time how my particular brand of uveitis would behave, but getting to that point felt like chaos.”

At the recommendation of a family friend, she sought out the expert opinion of Dr. Narsing Rao, an internationally renowned uveitis specialist who’s now interim dean of the Keck School of Medicine of USC. Dr. Rao was concerned about the rising pressure in her left eye, which was now twice the upper limit of normal (normal eye pressure is considered 10-21 mmHg). He knew that vision loss that could occur as a result of glaucoma damage.

That same week, Dr. Rao referred her to see Dr. Brian Song, a glaucoma specialist at the USC Roski Eye Institute. “Namita’s pressure was out of control when I first met her,” Dr. Song said. “This is not uncommon in patients with uveitis, because they often require steroid eye drops to control their pressure. However, steroid eye drops are often associated with a rise in the eye pressure, sometimes to dangerous levels, as it did in Namita’s case.”

Dr. Song initially made some changes to Namita’s medications with the hope of avoiding surgery, but this only led to a minimal improvement in her pressure. At this point, she was using five different medications to try to control the eye pressure, so Dr. Song recommended she undergo urgent surgery to lower the pressure and save her sight. While traditional glaucoma surgery involves making a large incision or placing a large tube in the eye to lower the pressure, Dr. Song thought she was a good candidate for a newer, minimally invasive glaucoma surgery (MIGS). The advantage of MIGS in Namita’s case would be a lower risk of complications and a faster, easier recovery.

While Namita did not like the thought of having eye surgery, she knew there was no other choice. “It felt unfair, because the treatment I needed for the uveitis had caused the elevated pressure that resulted in my needing surgery,” she said. “But Dr. Song was patient and informative. He referenced data that had been published just weeks earlier in a medical journal, indicating how he was also searching for the best way to treat his patients.”

Not long after, Dr. Song performed a combined canaloplasty and trabeculotomy through a small incision to open the natural drain of the eye. “In glaucoma that occurs from uveitis and steroids used to treat the uveitis, the eye’s natural drain often is not functioning properly,” said Dr. Song. “In the right patient, we can use a special instrument, called the OMNI, through a small incision to open up the eye’s natural drain without creating a separate artificial drain or placing an implant in the eye.”

The morning after surgery, the pressure in Namita’s eye had dropped back to normal levels. Now, six months later, not only is her pressure controlled, but her uveitis has not recurred, thanks to a new, simpler treatment regimen.

“I was very happy to find that the pressure in my eye had decreased as expected, confirming that the surgery had solved the problem. I am so grateful for the care I received at USC and to be able to focus on my studies again.”

To make an appointment at the USC Roski Eye Institute, please call (323) 442-6335 or contact us to schedule a consultation today.

Can Monkeypox Affect Your Eyes? Answers from an Eye Specialist

Ask the Expert: How COVID-19 Affects the Eyes

When Blindness Attacks: How Research and Cutting-Edge Clinical Techniques Saved...

Vanessa Ho was just beginning her Saturday morning when she suddenly felt intense pain and blurry vision in her right...
Read more

The Corneal Correction: How a Specialty Scleral Lens Restored a...

Three years ago, an outside clinic diagnosed Maria Contreras with keratoconus, a degenerative eye disease that causes thinning and bulging...
Read more

It’s Workplace Eye Wellness Month, What Serious Dangers are at...

Whether you’re a full-time employee or a freelancer working from the comfort of home, it’s important to be aware of...
Read more

The Ability to Blink: How Oculoplastics Saved a Burn Victim’s...

When Joe Cruz had a car accident in Northern California, burn marks left his face so devastated that he lost...
Read more
navigate_before Previous navigate_next Next
calendar_todayRequest an Appointment phoneCall Us: (800) USC-CARE searchFind a Provider placeFind a Location