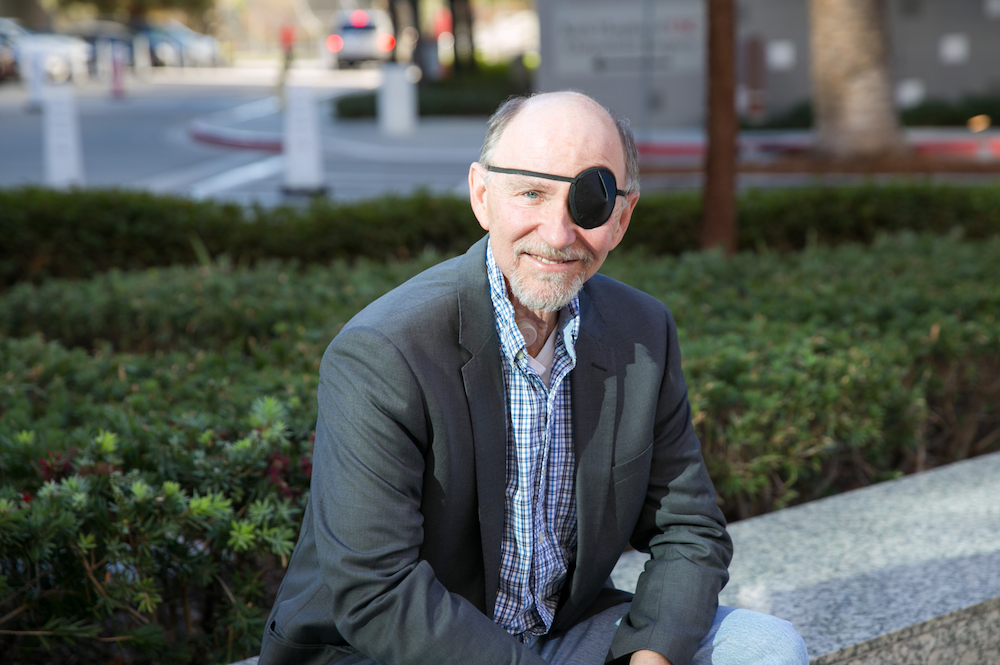 Bill Brummel underwent a laryngectomy because of the irreversible effects of cancer-combatting radiation, but the experience gave him the courage to see life in a new light.

Emmy-nominated filmmaker Bill Brummel survived cancer 20 years ago, but his physician warned that, eventually, the effects of aggressive radiation to his lymph nodes and tonsils would require him to undergo a laryngectomy to remove all or part of his voice box.

“I’ve heard that radiation is the gift that keeps on giving, and though it saved my life, the long-term adverse effects of radiation cause injury,” Bill said. “Over the years, I began to have aches, pains and a growing tightness in my neck. I had many surgeries to remove polyps from my vocal cords and to expand my narrowing esophagus as tissue in my neck began to scar.”

Encouraged by his wife, Frances, Bill attended Nu Voices Los Angeles, a support group at Keck Medicine of USC for patients who have undergone laryngectomies and their caregivers. The fact that people were living rich lives after their surgery made an impression on Bill. “Seeing and listening to them was like staring into a crystal ball,” Bill said. “The experience was disconcerting and at the same time reassuring — the happiness quotient of group members encouraged me in terms of what life may hold after a laryngectomy. But I continued to stall. I was apprehensive and in denial.”

In 2016, Bill’s trachea had constricted so much that he was constantly short of breath. His colleagues noticed that his voice was weakening. His wife said she could hear him breathing, even when she was in a different room in their house. During a routine appointment, Bill’s surgeon, Uttam K. Sinha, MD, who is an otolaryngologist at Keck Medicine of USC and the medical director of head and neck surgery and associate professor of clinical otolaryngology – head and neck surgery at the Keck School of Medicine of USC, insisted that Bill have the surgery immediately.

“He told me, ‘We can’t wait any longer. We have to do the laryngectomy now,’” Bill said. “He considered my condition so serious that he assembled a full surgical team to come into the operating room on Saturday.”

During surgery, Sinha removed Bill’s larynx and reconstructed an opening in his neck, called a tracheostoma, to allow him to breathe. In addition to adjusting to this life-altering surgery, recovery was complicated. Bill experienced swelling, pain and discomfort. His surgery required that a tube be kept inside the tracheostoma for weeks to keep it from closing. Additionally, doctors said it would take from three weeks to several months before Bill could speak again, so he could communicate only in writing.

Prior to the surgery, Bill and Sinha had discussed verbal communication options. Both had agreed that Bill would benefit from tracheoesophageal voice restoration, a procedure that required the surgeon to create an opening between Bill’s trachea and esophagus. During his laryngectomy, a voice prosthesis — a small silicone device with a one-way valve — was placed in this area, allowing the air to pass through the tissue in Bill’s throat and resulting in vibrations that created a “new” voice.

Along with the physical impacts of surgery, came psychological impacts too. Many people who have laryngectomies find themselves depressed, isolated, lonely and scared. They often withdraw and avoid social interaction because of the severe change in the way they speak. With continued support from his friends at his Nu Voices Los Angeles meetings, Bill found the courage to grapple with these emotions.

Bill also met with Brenda Villegas, EdD, CCC-SLP, SLP, EDD, who is a speech-language pathologist at Keck Medicine and clinical associate professor of otolaryngology – head and neck surgery at the Keck School, for speech therapy sessions to learn how to use his new voice. He also received swallowing therapy to retrain his swallowing function in addition to undergoing multiple dilations of the esophagus done by Sinha.

Three months after his surgery, Bill stood in the bathroom and tried to count to 10. “When ‘one’ emerged from my mouth, I was taken aback,” Bill remembered. “I pressed on, all the way to 10. I hated the sound of my new artificial voice, but I was relieved, happy to be able to communicate.”

After his recovery, Bill began working on a documentary, titled “Segue”, about individuals living meaningful lives in the wake of their laryngectomies. “It is a stirring testimony about the human capacity for resilience, even in the face of overwhelming adversity,” Bill said.

“I am blessed with a quality of life more resonant than before my laryngectomy, just as my doctor promised,” Bill explained. “I no longer hate my mechanical-sounding voice. I view my disabilities arising from cancer and cancer treatments as battle scars, visible and audible signs of where I came from and what I was able to overcome.”

“But I am acutely aware that I wouldn’t have reached secure emotional health without the love, support and encouragement of family, friends, my medical team and the cancer survivors I am honored to know through support groups,” he continued. “When I was at my emotional lowest, group members helped guide me to a light to illuminate my path forward.”

Bill’s story is just one more example of The Keck Effect — when life seems to want to knock us down, we can find the support and the courage to tell it loud and clear: Not today; we’re just getting warmed up.

When Blindness Attacks: How Research and Cutting-Edge Clinical Techniques Saved...

Vanessa Ho was just beginning her Saturday morning when she suddenly felt intense pain and blurry vision in her right...
Read more

The Corneal Correction: How a Specialty Scleral Lens Restored a...

Three years ago, an outside clinic diagnosed Maria Contreras with keratoconus, a degenerative eye disease that causes thinning and bulging...
Read more

In the summer of 2016, Laura Priest’s busy life came to a halt, when a ruptured brain aneurysm landed her...
Read more

The Ability to Blink: How Oculoplastics Saved a Burn Victim’s...

When Joe Cruz had a car accident in Northern California, burn marks left his face so devastated that he lost...
Read more

From Silhouettes to Sight: How a Keratoprosthesis Corrected One Patient’s...

Ever since Roslymn Caldwell was born, she had eye conditions. What began as a lazy eye in childhood advanced to...
Read more
navigate_before Previous navigate_next Next
calendar_todayRequest an Appointment phoneCall Us: (800) USC-CARE searchFind a Provider placeFind a Location